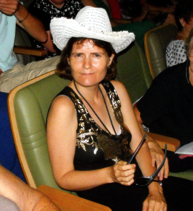 Lucy, child-woman. And brain on damaged brainstem, Which misdirects signals from active body to intelligent mind.

Yes – I am a writer and a poet – and I actually composed poetry in my soul, and then my mind when all my language was inside me. Now I write for fun, and so I need to stand outside myself and look at who I am.

Brown hair, size 12 woman, flapping fingers and the heroine of 40 years without speech. So I see myself as a character, possibly puck-like, happy and bouncing from place to place – a bit of a tigger there! – so not sure yet.

My secret is that I have autism because, yes, I see that in the mirror – a kind of multilayered effect, not imaginary but a real view of my silver-banned world in glass.

Seaweed on a wave, dancing, drifting and stranded
A cloud of molecules in red tubes and cream hide
Lovely and a pleasure to live inside – totally comfy.

A triangle in a world of violins
An echo but not an original chord
My voice sings for the angels.

My bones throb with life – living tissue with strength.
My bones hold my head and define my heeled feet.
My bones, oh yeah, they will live beyond me.

I miss ice cream, having lots of lego, being really young.
The lack of lego leaves my brain without keeping order in fluid chaos.
Lacking lego leaves lost soul
Unable to put order in things
Lego – without it I problem solve cause and effect without patterns.

Hope is a path.
My feet skim it.
Autism runs my life,
And my body is soothed
By my spinning world
As my feet run the tacking stitches,
Sewing the mind and head
To the sea, land and sky
So feet sing of goodness of God and Angels
As birds swoop in the wind.

Whoosh, roar, thump, splash.
Trees singing war chants before pistol cracks
And people scared on screens which encase drowned road signs and frantic roof clingers
Hooked above like spider-caught flies without possessions
And then squatting in the school hall with the glossy girl floating the microphone
As more rain bashes the window behind my television chair.

I am a sofa
Not a nice sliding sofa with a bed incorporated.
Not a sleek steel and leather recliner.
Not a brocaded chaise lounge.
But …
An old, smelly, tweed lump – most disappointing.
How did I get to this state?
Ha!  Here comes my occupant.
Drool
Flop
Smell and sniff.
Bloodhound.
Sniff
Slop.

A world view without compare
The smooth sparkles
But the rough glows with apricot softness.
No projector needed
It has its own built in screen
With touch-sensitive gel
Which gives echoes in the brainstem
Must experience to appreciate.

My most memorable experience was being aware I had language in my head – that was when I had the ability to read with meaning and no one knew. I was really sad.  I was only five.
“The book was from the library and it had pictures.
The sea was taffeta and I flipped the pages.
Then the black shapes all linked with the words she spoke.
I cooed and hummed, but my soul wept.  She read aloud but I could not.
The weary anger was in me, not the book.”

The moment that I saw other people outside ‘DEAL’ (Rosemary Crossley’s Facilitated Communication Centre in Melbourne) using typing was extraordinary; the first time then I realised that I was not the only intelligent person without language, or speech rather.  The whole of my world changed. Facilitation is a partnership that makes me touch the letters I intend.

Rather than being a single, peculiar freak I had now entered a mysterious masonry of hidden brilliance.  That was dreadful because before this, each of us had thought that we (ie she/he) were not with other people as bright as us.  Very humbling.

I was already a published author of Lucy’s Story: Autism and Other Adventures,

graduate and poet before the Brotherhood, and had also met other facilitation users with the same background. It was the non-clinical environment, and the sheer fun that renewed my enthusiasm and gave me complete acceptance with my peers, not as a freak. Here it is OK to be intelligent, creative and also behaviourally weird.

So I would say, really actually walking in the door for the first time, and then making a stage appearance was pretty ground breaking! The Brotherhood has been ten years of companionship with The Touch of Thought in Concert.

I am now  41 years old and live in Redcliffe. My new book is Carrying Autism, Feeling Language now available on http://www.smashwords.com (free download for limited period). Or from bookinhand.com.au

My last words would be: “Hey, where are heaven’s keys”?

Others would say: “She was a writer”. “She knows what defines her world, her vision, the sound around her, and where she floats in space – Mars the next destination”.